Have you already booked?   Informations

Ticket that includes the visit of Villa delle Ginestre located along the Golden Mile, in the municipality of Herculaneum. 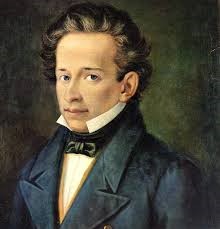 THE GINESTRA AND THE SUNSET OF THE MOON

At the foot of Vesuvius, in a splendid panoramic position, dominated on one side by the power of the volcano and on the other by the Gulf of Naples, stands Villa delle Ginestre which hosted Giacomo Leopardi in the last years of his life.

The Villa was built at the end of the seventeenth century by Canon Simioli who used it as a summer residence, often hosting important personalities of the Neapolitan culture such as Luigi Vanvitelli who probably designed the staircase leading to the upper floor. Later the residence was inherited by Simioli's niece who married Diego Ferrigni. From the marriage was born Giuseppe Ferrigni who in 1826 married Enrichetta Ranieri, sister of Antonio, a close friend of Leopardi. It is at this moment that the destinies of the villa intersect with those of the Poet: Ferrigni placed at Leopardi's disposal the dwelling which, in the mildness of the climate, would offer comfort to his poor health. Thanks to Ferrigni, a politically committed lawyer and magistrate, founder of the authoritative Minerva Napolitan periodical of Neapolitan constitutionalism, a person with vast cultural interests, particularly philosophical and literary, Leopardi was able to be surrounded by a lively intellectual environment. 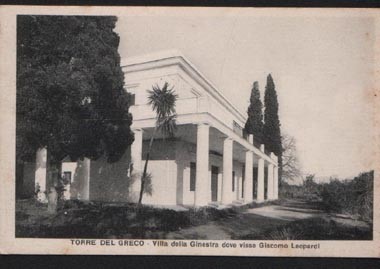 The current name of the Villa refers to one of the two poems composed by the Poet in this residence: La Ginestra precisely, and the Sunset of the moon. Around 1847 the Ferrigni family moved to Naples and the Villa resumed its function as a summer residence. At the end of the nineteenth century, a nephew of Giuseppe Ferrigni married Adelaide Leopardi, great-granddaughter of the Poet and they lived for a short time in the Villa where the young bride died. In 1907 the Villa was inherited by Antonio Carafa, great-grandson of Giuseppe Ferrigni. The renovation of the residence dates back to that period with the creation of the portico on three sides to support the upper terrace, giving the Villa its current appearance. In 1937, in the presence of King Vittorio Emanuele III, the villa was proclaimed a National Monument with the affixing of a commemorative plaque.

The Villa has been owned by the Federico II University of Naples since 1962. Currently the management and enhancement of the site is entrusted to the Ente Ville Vesuviane Foundation which has created a museum itinerary that enhances the visit to the room that housed the poet where the structure and the historic furniture are kept. The narration of Leopardi's Torrese and Neapolitan stay follows in the other rooms on the first floor by means of audio-visual languages ​​capable of presenting themselves to the student as to the traveler.

the broom or the desert flower 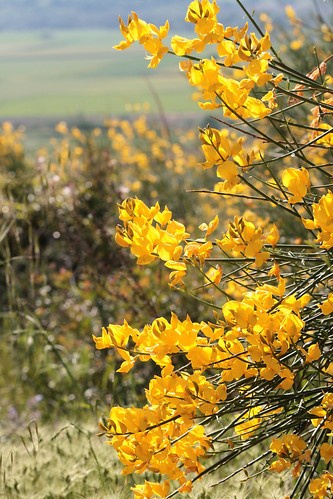 Here on the arid back
Of the formidable mountain
Exterminator Vesevo,
Which nothing else is cheerful arbor or flower,
You scatter around your solitary tufts,
Smelling broom,
Happy with the deserts. I still saw you
Your stems will embellish the herm district
That encircle the city
Who was once a woman of mortals,
And of the lost empire
It seems with a grave and taciturn aspect
Faith and remember the passenger. 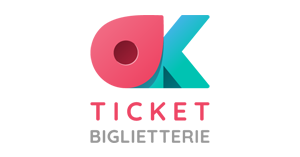 We sell tickets, sure. But in reality we offer sensations, joy, cultural interactions, the pleasures of life.

okTicket in fact puts inside your tickets all the passion for art, for the cities to visit, for the taste of discovery. Food for the soul (and not only). Because a museum, like an archaeological or scientific site, is full of stories.

okTicket works every day to facilitate access for all people to the treasures that Italy preserves in every corner. Beauty and to put in your smartphone, with a simple click: the ticket that opens the doors of a wonderful heritage.

Duration: 1 hour
Biglietti acquistabili: from 1 to 14 (in base alla disponibilità)
Timetables: tue - sun 10 am - 1 pm
This ticket is not refundable
You better book on-line!

you always have these benefits included

How to reach the property 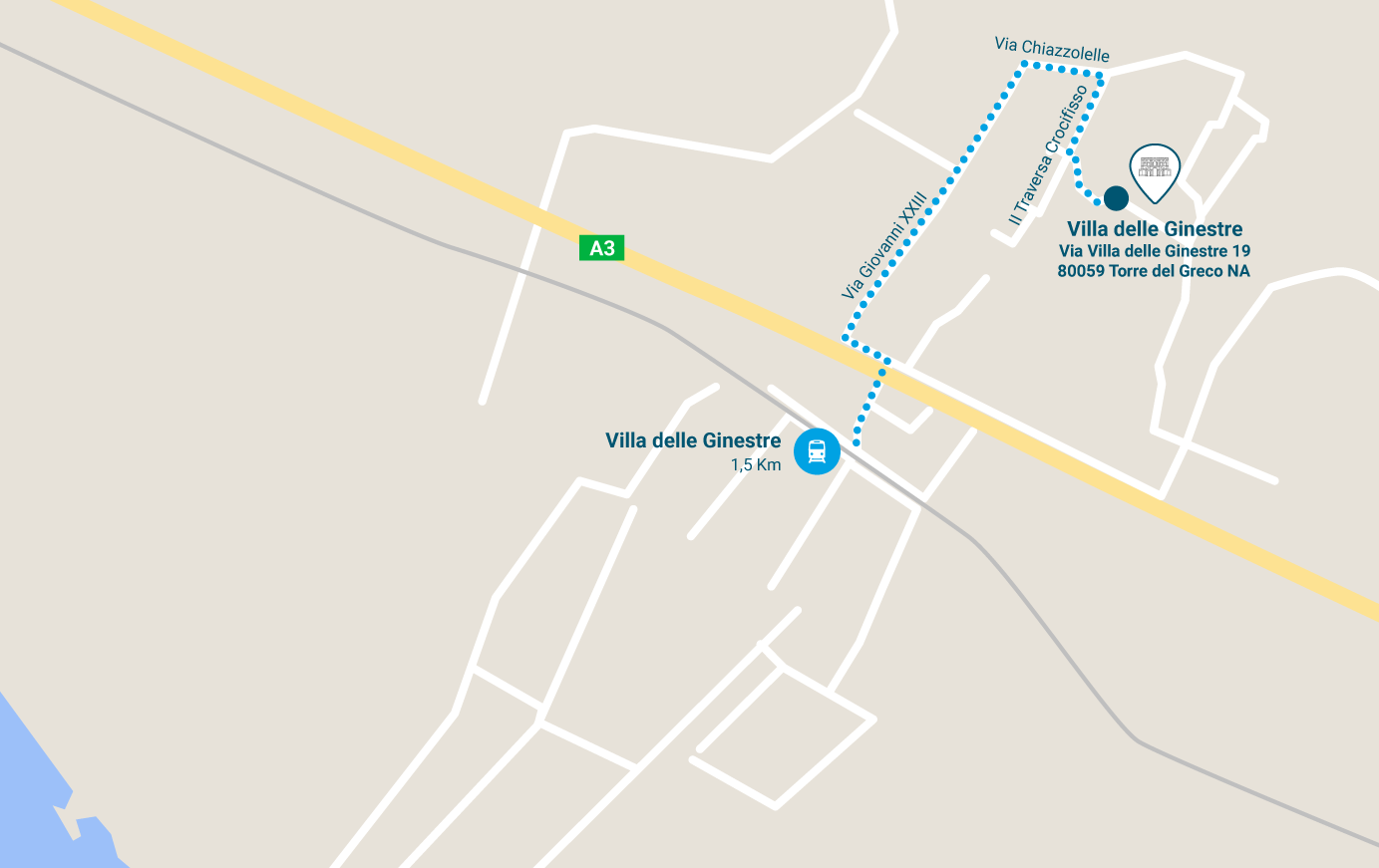 Pinch and drag for more details

The opening hours of the structure

+39 081 7322134
info@villevesuviane.net
show ticket
move visit
request refund
cancel booking
call
navigate
You are going to leave the on-line ticket shop. Do you confirm?
You are about to leave the donation area of okTicket. Confirm?
If you choose to proceed, all selections made will be reset, so you can restart from scratch. Do you confirm?

Here are some tips for you:
Do you want to know how to pay?
We accept payments made with:
(*) available only if your device is enabled
Do you need an Invoice?
Don't worry, continue with the purchase by choosing "Company/Organization" so you can specify all the data for billing.
After payment we will send you an pro-forma invoice (pdf). If your company is located in Italy, after a few days you will receive the electronic invoice sended through the SDI.
Do you have doubts during the purchase?
When you find this icon:
click it and get more details about the section you are in.
Do you need more information?
Close
If you have already booked, you can access your personal area to manage your orders.
or
Insert your e-mail
Enter your password
Forgot password?
••••• ?
With this procedure we will help you to reset your lost password. Enter the email you used during registration.
Insert your e-mail
Check the field below and make sure you have entered the correct address. If the address is correct, please check your SPAM folder.
Insert your e-mail
We have sent a 6-digit code to your email. Confirm your identity with this code and you can set a new password.
Enter the security code
Didn't receive the code?
•••••
Thank you .
You can now choose a new password.
Attention, for your safety
Enter the new password
Verify the new password
Show characters
We finished !
We have already connected you to save you time, but remember to make a note of the password you have just chosen for your next logins.
Are you sure you want to cancel the password recovery?